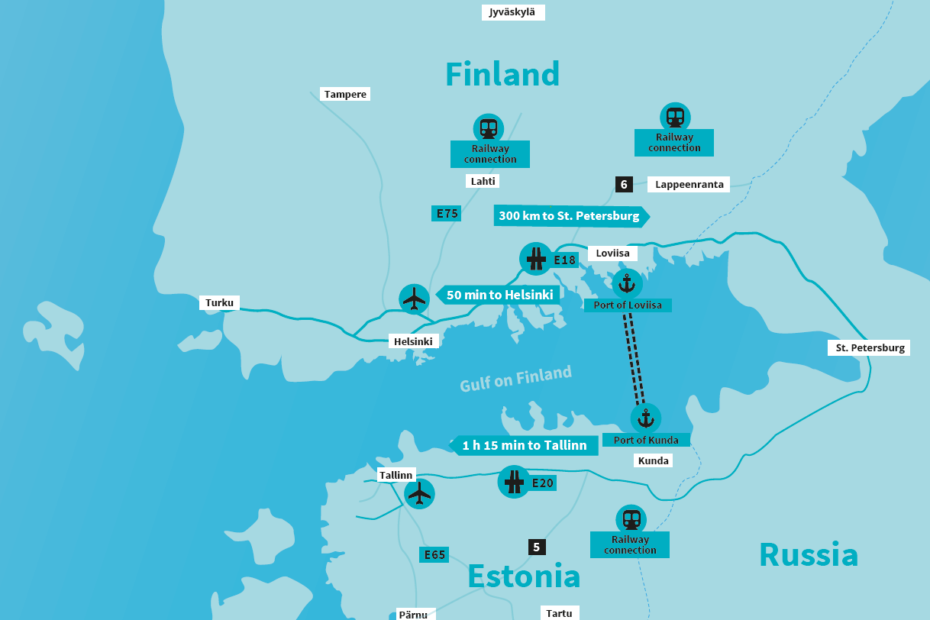 Open ENLoCC member CMS in Turku has taken part in a feasibility study on a new ferry line.

The Gulf of Finland in the Baltic Sea is a hotspot of maritime transport. Besides extensive east-west traffic to Russian, Finnish and Estonian ports, there is an intense north-south ropax traffic between Helsinki and Tallinn which transported 377 000 trucks and semi-trailers in 2019. The volume has grown annually almost every year during the last twenty years. A remarkable part of this heavy vehicle traffic takes place between eastern Finland and eastern Estonia. This means that there is a potential to activate a straight transport corridor if there was a ferry connection east of the capitals of both countries.

The Reinforcing Eastern Finland-Estonia Transport Corridor (REFEC) project aimed at supporting the establishment of a foreseen ferry connection between the ports of Loviisa (FI) and Kunda (EE). The project conducted different studies and concrete planning to provide the ports, which do not currently have roro traffic, with capacities to incorporate the new traffic mode. The project results can also be used for promoting the foreseen connection towards the potential ferry operators. The EU Interreg Central Baltic Programme funded the project.

Firstly, the hinterland cargo potentials were elaborated, using regional trade and transport statistics in both countries, and were specified with surveys and interviews of the forwarding and transport companies as well as with cargo shippers of the corridor area. The cargo potential for a Loviisa-Kunda route was estimated to be about 20 000 – 40 000 roro units per year. The ferry capacity should also allow passengers with cars. Commuters between Estonia and Finland are projected to be the main client group within the passenger segment.

The main focus of the project was, however, in concrete actions on how to prepare the ports to the foreseen new traffic mode. The first step was to design the new port master plan, which included the roro traffic as a new activity in the port layout. This meant relocating some current port activities in the new plan. The second step was to focus on the most essential planning issues, based on the findings of the master plan, since the volume of procured planning services was limited by the project budget. In Kunda, a quay design plan was produced which was detailed enough to form a basis for tendering the construction of the quay in the future. In Loviisa, the impact of roro traffic to dust and noise generation was procured, and a more detailed plan including the port extension area was conducted. A ground and soil study for constructing in the area was carried out in both ports.

Furthermore, the ropax connections in the Baltic Sea Region (BSR) were explored to find similar connections like the foreseen Loviisa-Kunda ferry for benchmarking. Eventually, six connections having approximately the same travel time and annual cargo volume were taken for closer analysis. The results indicate that Loviisa-Kunda connection should be economically viable like these benchmarked services.

The administrative procedures and regulations related to launching a new ropax connection were screened to set the timeframes for different required licenses and permits. Furthermore, the ferry schedule options were elaborated in a workshop. With 3 to 3.5 h travel time, a single ferry ship would be able to serve two daily departures per direction. A feasible ferry would have a capacity of 1200 – 1400 lane meters. Most probably, such a vessel would be second-hand and previously used in northern Baltic Sea routes, since vessels with the necessary 1A ice class are not much available elsewhere.

Finally, based on the previous results of the project, a business and feasibility model for the foreseen Loviisa-Kunda ferry connection was composed. The model was built on business model canvas and evaluated with SWOT analysis and some other generic criteria. The feasibility section of the study was completed with the consultations of the shipping companies who are currently operating existing Finland-Estonia ferry lines. The business model for a Loviisa –Kunda ferry service needs to differentiate in this very competitive market. Therefore, it is essential that this cargo driven solution would aim at low operating costs, by offering only minimal onboard services, since these would not produce as much revenue as between Helsinki and Tallinn, which is a mainly tourist driven route.

The REFEC project proved the benefits for removing the bottleneck of a missing ferry link between Loviisa and Kunda. The connection would benefit eastern Finland and north-eastern Estonia cargo transport. Besides this, it would be a reasonable connection for transports that depart or arrive to the capital regions from the REFEC transport corridor. The commuter traffic is a client segment which can also benefit from the service and thus support the economic viability of the ferry connection.

The major follow up activity is to promote the foreseen connection and project to the logistics sector, to generate the motivation of shipping companies to establish the service. Another issue that needs attention is the TEN-T policy, which is currently under revision. One critical issue is to attain TEN-T comprehensive port status to Loviisa and Kunda in order for being eligible for CEF funding, which would help the ports to realise infrastructure modifications needed for roro traffic.